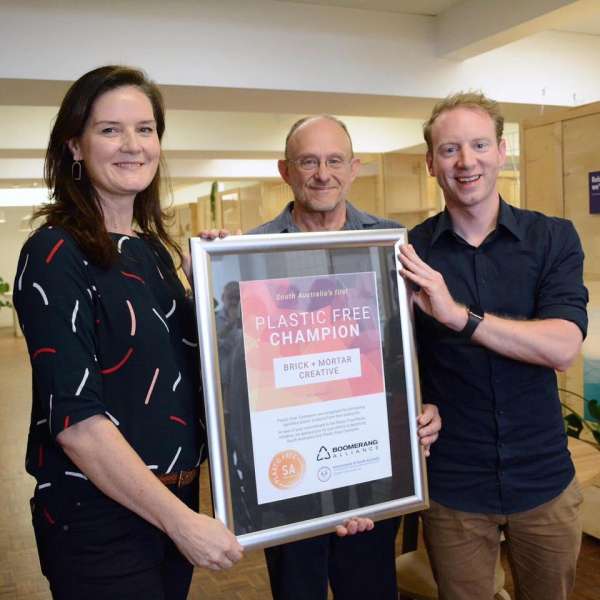 The first business in the state has officially gone ‘plastic free’ under the Marshall Liberal Government’s plan to ban single-use plastics in South Australia.

“This is a very exciting day for the Marshall Liberal Government’s plan to ban single-use plastics in South Australia,” said Minister Speirs.

“Ever since we announced our first single-use plastic free precincts including the Parade (Norwood), Jetty Road Brighton Traders, Adelaide Central Markets and Surf Life Saving South Australia clubs, businesses in these areas have been working towards going plastic free with help from Boomerang Alliance.

“I congratulate Brick+Mortar Creative for being the first business in South Australia to officially go plastic free and look forward to others joining them soon.

“Traders on Jetty Road at Brighton, the Adelaide Central Markets, all of our Surf Life Saving clubs and The Parade here at Norwood have shown just how committed South Australians are to reduce their reliance on single use plastics and I look forward to announcing more Plastic Free Champions in the coming months.

“Earlier this year South Australians told us unambiguously that they wanted urgent action on the issue of single use plastics in our environment and the Marshall Liberal Government has been working towards ever since.

“We’ve moved quickly to respond to community concern, and developed an approach that balances benefit of the environment while minimising impact for businesses and not discriminating against people living with a disability who might find themselves reliant on certain single-use plastics.

“I now invite South Australians to give us their comments on the draft Bill we’re proposing to ban these single-use plastics.”

The proposed draft Bill, the Single-use and Other Plastic Products (Waste Avoidance) Bill 2019 has been released for consultation and public feedback through the Green Industries SA website, greenindustries.sa.gov.au/plastic. Consultation is open until Friday 7 February 2020.

Brick+Mortar Creative director Elizabeth Donaldson said a collaborative effort by business, consumers and government is vital to share the cost and spread the benefit of making a city sustainable.

“As a small business owner I feel it’s my social responsibility to minimise our environmental impact, and we do that through composting the organic waste from our café, only using compostable packaging and recycling our containers,” said Ms Donaldson.

Boomerang Alliance Director Jeff Angel commended Brick+Mortar Creative on embracing the challenge rather than shying away from doing things differently.

“Boomerang Alliance have run our Plastic-Free Places program in Noosa (Queensland), Perth (Western Australia) and Byron (NSW). We can see South Australia is continuing to lead not just nationally but internationally when it comes to container deposits, the plastic bag ban, and now the will to act on legislating to ban single use plastics,” said Mr Angel.