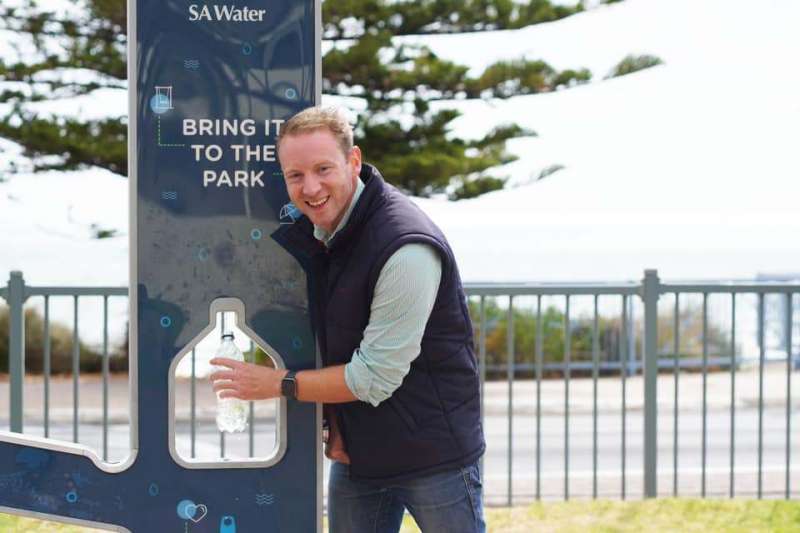 South Australians will tap in to around 80 new SA Water drinking water fountains across the state over the next four years, further contributing to the Marshall Liberal Government’s efforts to reduce the impact of single-use plastics on the environment.

More than 50 of SA Water’s intelligent drinking water fountains already provide free access to safe clean drinking water across the state, with another 15 going in the ground in metropolitan and regional South Australia by July this year.

Minister for Environment and Water David Speirs said the wave of new fountains will help the community embrace a sustainable substitute for bottled water.

“By making simple changes to our daily habits like carrying a reusable bottle, we can eliminate the need for unnecessary single-use plastic and drastically reduce their impact on our environment,” Minister Speirs said.

“I have seen the positive benefits recently in my own local community of Brighton, where more than 10,000 litres of clean, safe drinking water has been consumed at the Bindarra Reserve’s Bring Your Own Bottle (BYOB) drinking fountain since it was installed last year, saving an estimated 17,000 plastic drinking bottles that would normally head to landfill.

“With around 370 million single-use plastic water bottles making their way to landfill each year in Australia, public drinking fountains are vital assets operating in parks, ovals and community hubs that can help stem the impact of plastics and inspire sustainable behaviours.

“The Marshall Liberal Government’s new legislation to ban single-use plastics as of March this year has cemented South Australia as a national leader, and this batch of brand-new bubblers only demonstrates this further.”

SA Water’s drinking fountains have a low-lying arm bubbler on the side to ensure they are accessible for children and wheelchair users and many have in-ground, foot-operated dog bowls. Smart technology enables their water use to be remotely monitored and maintenance scheduled.

“I encourage everyone to track down their closest drinking fountain through SA Water’s BYOB mobile phone app, which uses an interactive map to display more than 1000 drinking water fountains operating across South Australia,” Minister Speirs said.

“It’s as easy as remembering to bring your own reusable bottle when you leave the house for exercise or a day out with the family, and filling-up is free.”

SA Water is working with metropolitan and regional councils to install the suite of new drinking fountains at various locations over the coming months, building on the locations recently selected in Littlehampton, West Beach, Two Wells and the newly opened Hope Valley Reservoir Reserve.

SA Water is also inviting feedback from the community on where they would like drinking fountains installed in their local area, with people encouraged to contact the utility via Facebook – @sawatercorp.