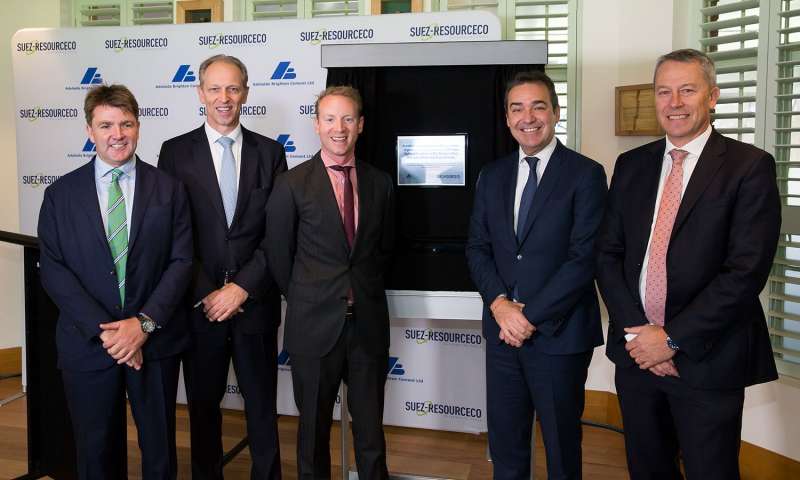 South Australia continues to lead the way in resource recovery as SUEZ-ResourceCo celebrates one million tonnes of alternative fuel generated at its Wingfield facility in Adelaide’s northern suburbs.

The fuel is then on-sold to Adelaide Brighton Cement to reduce the use of raw materials in the manufacturing process.

The cement produced by Adelaide Brighton is then used in a host of major infrastructure projects across South Australia, including the recent redevelopment at Adelaide Oval, which is playing host to today’s milestone celebration.

Premier Steven Marshall said that South Australia leads the nation in resource recovery and projects like this are fantastic for the environment as well as the economy.

“The alternative fuels plant at Wingfield is a great example of what’s possible in the resource recovery industry and has helped reduce greenhouse gas emissions equivalent to the electricity supply of 50,000 homes,” said Premier Marshall.

“We know that for every tonne of waste recycled there are more than three times the amount of jobs created compared to when sent to landfill.

“This is why the South Australian Government has a focus on improved waste management in our state which will improve both environmental outcomes as well as boost our economy.”

Minister for Environment and Water David Speirs said the SUEZ-ResourceCo facility at Wingfield is the first of its kind in Australia.

“SUEZ-ResourceCo’s production of one million tonnes of alternative fuel at its Wingfield facility is a major milestone for the resource recovery industry in South Australia,” said Minister Speirs.

“This achievement has resulted in more than two million tonnes of waste being diverted from landfill and reinforces South Australia’s reputation as a national leader in waste management and circular economy initiatives.

“The waste management and resource recovery industry is a major player in South Australia’s economy with approximately 4,800 people employed and we want to this number to grow.”

Chairman of SUEZ-ResourceCo and CEO of SUEZ Australia & New Zealand Mark Venhoek said that the partnership has seen both a huge reduction in reliance on fossil fuels and significant diversion from landfill.

“Processed Engineered Fuel presents a cost-effective, sustainable solution to the generation of baseload energy, while helping to address the complex issues of waste management – it’s a win/win,” said Mr Venhoek.

“It’s a great example of what’s possible. Adelaide is increasingly being recognised as a leader in circular economy initiatives and certainly this partnership is a good reflection of that.”