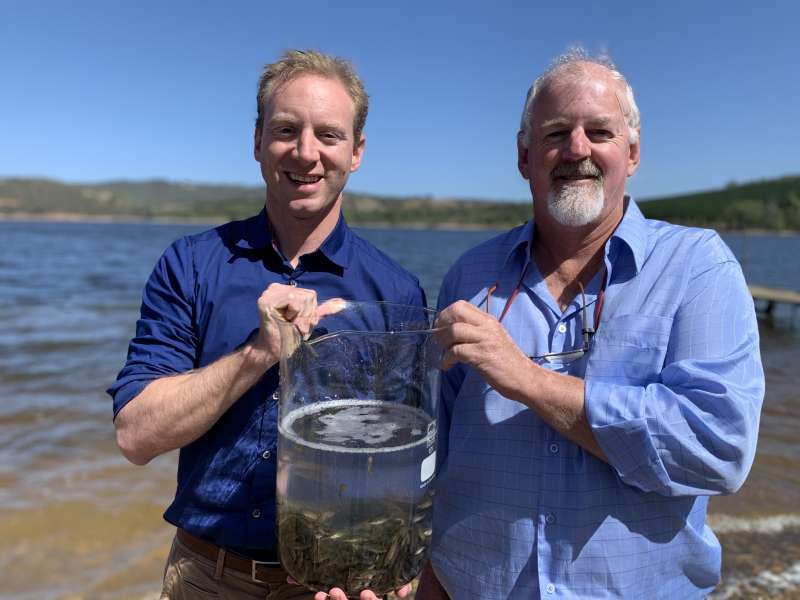 More than 90,000 native fish have been stocked at Myponga Reservoir, as part of the Marshall Liberal Government’s commitment to offer recreational activities at reservoirs across South Australia.

With keen anglers dropping a line at the reservoir since access for shore-based fishing was first allowed in December, 32,000 Murray Cod fingerlings and 30,000 each of Silver Perch and Golden Perch have been released at Myponga.

Minister for Environment and Water David Speirs said the fish stocking is another example of the Marshall Liberal Government delivering on its commitment to open South Australia’s reservoirs for recreational activities.

“Fishing is high on the list for South Australians as a requested activity at reservoirs as they open for the first time for expanded access, and it was an exciting milestone to open up Myponga for fishing just a couple of months ago,” said Minister Speirs.

“We have carefully considered the best approach to provide recreational experiences and stocking Myponga Reservoir with more fish will make sure families and keen anglers can reel in a catch for years to come.

“This is the first major stocking milestone at Myponga, with plans underway to add yearling trout in mid-2020.

“Catching trout so close to Adelaide’s CBD will be another significant drawcard for the tourism and recreational fishing sectors in South Australia, and being yearlings means the fish will be larger and available for anglers to take much sooner than traditional fingerlings.”

Since becoming the first reservoir to open for expanded access in 2019, more than 13,600 visitors have already enjoyed and explored the Myponga Reservoir Reserve, which features a 3.3 kilometre walking trail, cycling paths and picnicking spots.

“Our reservoirs are beautiful parts of South Australia that have been locked-up from the general public for far too long, and we’re excited to press on with opening the gates at other reservoirs such as Little Para, Hope and Happy Valley in the coming months and years.”

With a capacity large enough to fill more than 55 Adelaide Ovals with water, supply stored in the reservoir is treated at the Myponga Water Treatment Plant before being delivered as clean, safe drinking water to thousands of SA Water customers across the Fleurieu Peninsula.

Fishing is available at a number of reservoir reserves, including Myponga, with a permit available for purchase at reservoirs.sa.gov.au.