New shellfish reef to be built at Glenelg 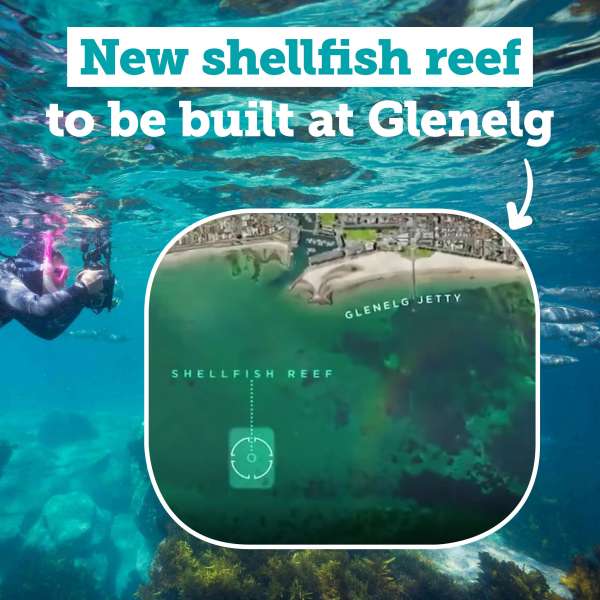 South Australia will have its first metropolitan native shellfish reef at Glenelg with the $1.2 million project to boost fish numbers and create jobs.

Glenelg was chosen as the location for the Adelaide Oval-sized reef ahead of O’Sullivan Beach and Port Noarlunga after scientific advice and public consultation.

Construction of the reef is expected to begin in September 2020 and will be delivered in partnership with the Marshall Liberal Government, The Nature Conservancy and City of Holdfast Bay.

Minister for Environment and Water David Speirs said the two-hectare shellfish reef will be constructed using a limestone reef base, with hatchery-raised Australian Flat Oysters deployed to re-create a living shellfish reef over the next several years.

“The Marshall Liberal Government is investing $1.2 million in the reef to create a flourishing marine environment that creates new habitat, supports fish and will create up to 10 full-time jobs in the region,” said Minister Speirs.

“Shellfish reefs were once common along sheltered nearshore areas of South Australia, however, from the late 1800s to mid-1900s the reefs suffered from the impact of overfishing, dredging, water pollution and disease.

“Aside from the recently completed Windara Reef off the coast of Ardrossan on the Yorke Peninsula, native oyster reefs are now near absent from South Australia’s waters.

“Shellfish reef habitats are important to the marine environment, fish breeding, and quality, but they can also provide recreational and economic opportunities to the state.

“We are committed to restoring our coastlines and earlier this year we undertook community consultation process to support the selection of a metro reef for local residents and tourists to enjoy.

“We received a significant amount of community interest during consultation with more than 1500 responses on the YourSAy website and three public meetings and it is clear the South Australian community has strong support for the restoration of a shellfish reef.

“In the end Glenelg was chosen as it offers suitable environmental conditions as well as the opportunities for the community, with such good public transport and beach access to the area.”

Member for Morphett Stephen Patterson said it was a great result for the local community to have Glenelg selected as the location for the new shellfish reef.

“The new $1.2 million shellfish reef will provide significant benefits to the community around Glenelg with increased recreational opportunities on offer which will provide a boost to the local economy,” said Mr Patterson.

“It’s fantastic to have Glenelg chosen as the location and I can’t wait for local residents and tourists to be able to experience the new reef which will also improve the marine environment in the area.”

“Oysters are excellent water filterers, with each one filtering 100 litres of water a day. This helps improve local water conditions which supports the return of other ecosystems like seagrass,” said Ms Nedosyko.

The Nature Conservancy in collaboration with the State Government will now refine the site to two hectares within the broader chosen five-hectare location.