Cash splash: South Australians to save hundreds on water 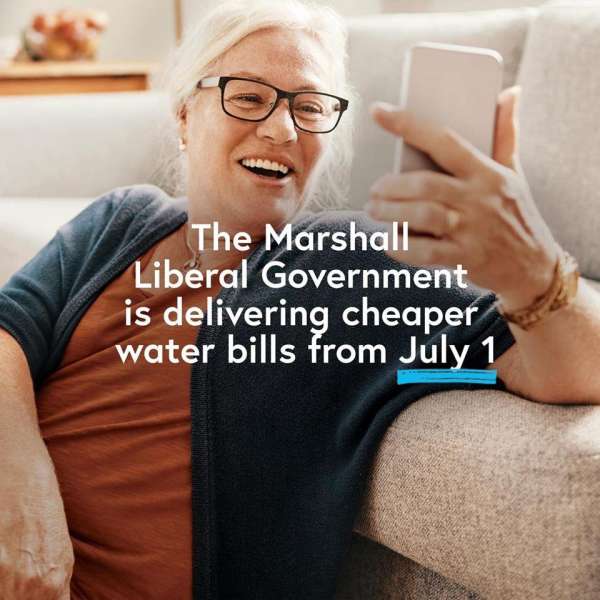 Hardworking South Australian families and businesses will save hundreds of dollars each year on their water bills under the Marshall Liberal Government.

From July 1, an average household will save approximately $200 each year, while an average business will receive savings of around $1,350.

In fact, some families will save significantly more – for example a household in Flinders Park with high water usage of 493 kilolitres per year and a home valued at $670,000 will save $428 next financial year.

Premier Steven Marshall said the announcement is a ‘victory for consumers’ after being forced to endure years of sky-rocketing water bills under the former Labor government.

“We are delivering one of the single biggest cost-of-living reductions for South Australians in recent years, which will put hundreds of dollars a year back in the pockets of hardworking families and local businesses,” said Premier Marshall.

“This will significantly ease the burden on local household and business budgets, providing welcome economic stimulus in the wake of COVID-19 and, in many cases, will have the potential to create jobs.

“For far too long under Labor, South Australians were pouring hard-earned money down the drain every single time they turned on the tap.”

This is the latest in a suite of initiatives under the Marshall Government helping deliver cost-of-living relief.

Minister for Environment and Water David Speirs said in total, South Australians will benefit from $186 million worth of water and sewerage bill savings next financial year (2020-21), whilst improving services.

“We are slashing the cost of water supply across the state, and significantly reducing how much South Australians pay for their water use. This means that before South Australians even turn on their tap, they’re saving money and the water they use will be much cheaper,” said Minister Speirs.

“We are investing significantly in improving water supply and security for regional communities such as Kangaroo Island and Oodnadatta.

“We’re getting on with fixing the problematic community wastewater management scheme at Tea Tree Gully which will save residents connected to the system in the north eastern suburbs around $400 a year extra.

“We’ve also committed $155 million to allow SA Water to appropriately invest in in the management of its water main network to provide the best level of service possible.”

To estimate what you will save on your water bill, visit: www.sawater.com.au/savingsestimator

An Independent Inquiry into Water Pricing in South Australia fulfilled an election commitment by the Marshall Government and handed down its damning final report in July last year.

Led by former regulator and respected corporate leader Lew Owens, the Inquiry found the former Labor government ignored advice and criticism by the Essential Services Commission of SA (ESCOSA) and other stakeholders by deliberately inflating the value of SA Water’s opening regulated asset base (RAB) for water by at least $520 million (in 2012 dollars) to $7.77 billion to maximise profits and protect government revenues, driving up water bills for South Australians.

The RAB, which reflects the value of SA Water’s economic assets, is important because it is used to set a Pricing Order which sets parameters that must be adopted by ESCOSA in setting its four-year price determination for water bills.

Treasurer Rob Lucas announced yesterday the Marshall Government had taken the first opportunity to revise down the value of SA Water’s RAB by $520 million (in 2012 dollars) - from $7.77 to $7.25 billion - considered by Mr Owens as ‘reasonable’, representing a fair balance between the interests of consumers and the Government.

The revised RAB value, together with a lower interest rate environment, has resulted in significantly lower water prices to customers and lower returns to the budget from 2020-21 onwards.