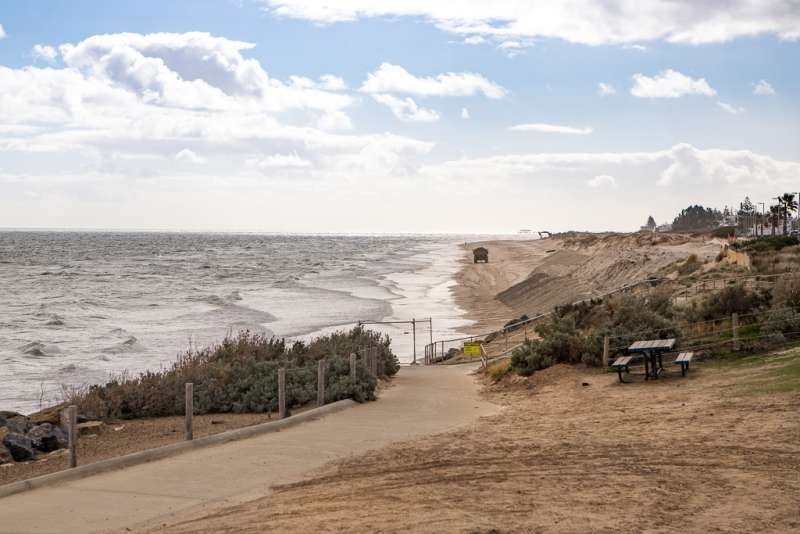 The Marshall Government is continuing to roll out its $48.4 million plan to secure the future of Adelaide’s metropolitan beaches.

Sand carting is continuing through winter and into spring to combat erosion at West Beach and Henley Beach South.

The sand carting started in April and will now continue into spring to build up the dunes at West Beach and Henley Beach South and protect the area.

Sand is being trucked from Semaphore to West Beach and Henley Beach South.

“The Marshall Government is investing to secure the future of some of Adelaide’s most beautiful metropolitan beaches,” said Minister for Environment and Water David Speirs.

“That’s why the Marshall Government is investing $48.4 million to save our metropolitan beaches.

“This consists of $20 million for additional sand and $28.4 million for the completion of a sand recycling pipeline from Semaphore to West Beach, as well as sand dune restoration and revegetation in partnership with local councils and coastal community groups.

“Sand carting will address the problem in the short term until the recently announced 500,000 cubic metres of new sand is sourced, and the Semaphore to West Beach sand recycling pipeline is built over the next four years to replenish the area for the long term.

“Adding sand to the foreshore at West Beach is important because it increases dune volume and the resilience of the area with benefits to other beaches, as sand naturally drifts northward.”

“These beaches are so important to, not only the local communities in that area, but South Australia more broadly as thousands of locals and tourists flock to our beaches during the summer months,” said Mr Cowdrey.

The public should take care when in the area and stay off the dunes and freshly placed sand. Safety signage is in place.

The Marshall Government has committed $48.4 million of funding over four years to secure Adelaide’s metropolitan coast.