The race is on to go plastic free in South Australia 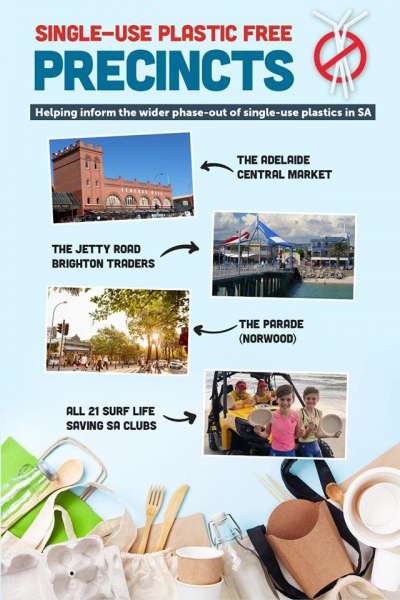 The four locations are the first to be included in the Marshall Liberal Government’s single-use plastic-free precincts.

“Taryn is a passionate, Adelaide-based person who will work with our surf life saving clubs, the Parade, Jetty Road and the Adelaide Central Markets to help lead the way.

“To be able to announce her appointment at the City to Bay Fun Run – an event which recognises the impact that single use plastics can have, is very fitting.

“Major events can play a huge role in reducing our use of single-use plastics and the City to Bay Fun Run is ahead of the curve having already introduced several measures including the use of biodegradable cups.

“I commend event organisers for their leadership in this space.”

“We are committed to reducing our impact on the environment which is why we only use biodegradable cups along the route and we engage Australia’s leading sustainable cleaning and waste management company, Australian Green Clean to ensure we are limiting waste going to landfill,” said Mr Stevens.

In what would be a first for an Australian state, the Marshall Liberal Government will ban single-use plastics in South Australia under proposed legislation to be introduced into Parliament in 2020.

“The message from the community is clear, they expect action on the issue of plastics, and it definitely feels like the time is right to reduce, remove and replace single use plastics where ever we can,” said Minister Speirs

“it’s so exciting to see some of our destination shopping precincts and the iconic Adelaide Central Markets commit to our plastic-free precinct trial.

“I’m especially pleased that Surf Life Saving South Australia has put their hand up to be part of the plastic-free precincts trial. Taryn attended the annual meeting of our surf lifesavers yesterday (Saturday 14 September) to give them an overview of how their journey to becoming plastic free will look and their passion for this issue from Surf Life Saving South Australia was clear to everyone.

“Having 21 of our surf life saving clubs decide to band together across the state to move from away from single use plastics is a national first. This kind of collaboration is the hallmark of our precinct approach.”

Boomerang Alliance’s Plastic Free SA Coordinator Taryn Hansen said she was excited to be working with such committed organisations.

“South Australians are so passionate on this issue. We knew we were going to be busy, and we knew this topic was front of mind for the community, but it’s really gratifying to see just how much interest there is and how much demand we’re seeing to join this movement,” said Ms Hansen.

A taskforce with representation from 15 different organisations which will help inform the next steps towards the banning of single-use plastics in South Australia met for the first time on Thursday.

“A wide range of members from interested stakeholders make up the taskforce, including environmental groups, business representatives, the hospitality industry as well as disability advocates,” said Minister Speirs.

“The group will discuss solutions and alternatives as part of any move to phase out single-use plastics to ensure South Australians can transition smoothly.”

The State Government’s lead agency on single use plastics, Green Industries SA has now had requests from Canberra, New South Wales and Queensland in recent weeks, eagerly looking to follow South Australia’s leadership on this topic.

“Given our reputation nationally, it’s not surprising that my colleagues interstate are blowing up my inbox with requests for advice from Green Industries SA on how a best practice policy process should look when it comes to trials, phase outs and public engagement,” said Vaughan Levitzke, Chief Executive of Green Industries SA.