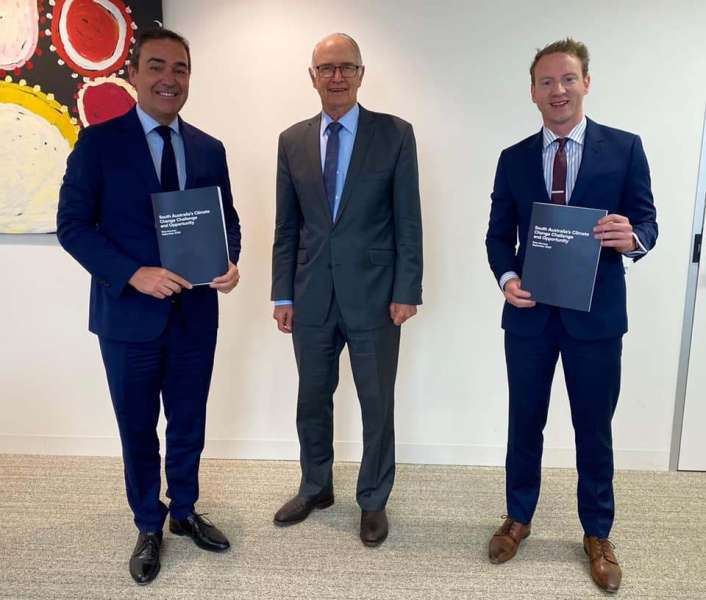 The Marshall Liberal Government’s approach to tackling climate change has been given the tick of approval by renowned climate economist Professor Ross Garnaut in a new report released today.

The report singles out South Australia as an international leader in the clean energy transition and highlights several economic opportunities for the State.

“South Australia is leading in the transition to clean energy and this report shows how the state can capitalise on its significant head-start,” said Professor Garnaut.

“South Australia is better equipped to respond to the challenges and opportunities of climate change than any other Australian state and nearly all of the world’s sub-national jurisdictions.

“The international economy is ready to deepen trade and investment with states that embrace the low-emissions transition, and regional South Australia would be one of the biggest beneficiaries from embracing new zero emissions opportunities.”

Minister for Environment and Water David Speirs said Professor Garnaut is Australia’s most respected authority when it comes to the economic risks and opportunities of climate change impacts.

“We believe tackling climate change is a win-win for our economy and environment, and the Marshall Liberal Government is working closely with leading experts to accelerate action on climate change, create innovative new jobs, and grow our economy,” said Minister Speirs.

“Professor Garnaut’s advice on the economic risks and opportunities of climate change will inform South Australia’s responses and support us to become a climate-smart state.

“At the start of this year we set the ambitious target of a 50 per cent reduction in emissions by 2030 and we are on well on the way to achieving this.

“In the past there has been plenty of virtue signalling, slogans and worthless gestures when it comes to climate change, but the Marshall Liberal Government is focussed on meaningful, practical action.

“As South Australia recovers from the economic impacts of the COVID-10 pandemic, there will be real opportunities for new industries in the climate-smart, green economy and we want to give businesses the confidence to invest and create new jobs.”

The report confirms that the COVID-19 pandemic has disrupted the status-quo but Professor Garnaut identifies several opportunities for South Australia including:

Minister Speirs said Professor Garnaut’s advice, paired with the Government’s new Climate Change Science and Knowledge Plan, are guiding the the next phase of government action on climate change.

“Our Climate Change Science and Knowledge Plan for South Australia will grow the evidence base to support South Australia’s responses to climate change.” said Minister Speirs.

“A new government climate change strategy, due for release this summer, will set out further practical actions that will help build a strong, climate smart economy, further reduce the state’s greenhouse gas emissions, and support South Australia to adapt to a changing climate.”

The reports can be found online at: www.environment.sa.gov.au