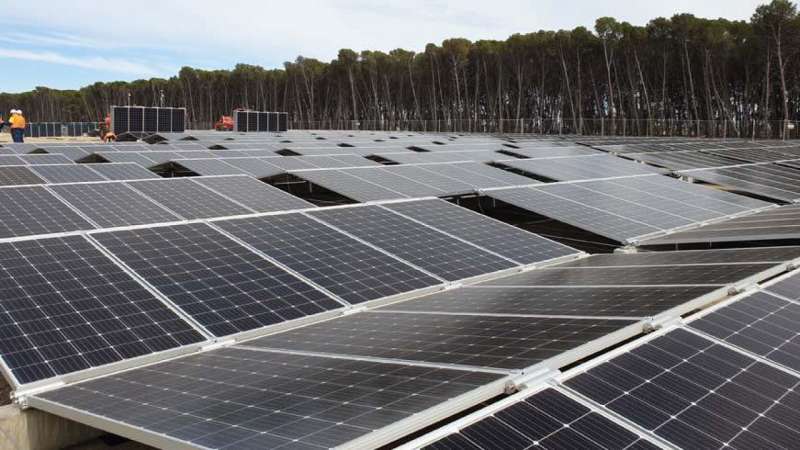 The first of more than 30,000 solar photovoltaic (PV) panels are now being positioned at the reservoir reserve in Adelaide’s South at the corner of Black and South Road with the project creating 250 jobs.

Created by Australian-based solar innovator 5B, the unique Maverick solar panels are pre-wired, fabricated and folded to allow for each panel to be delivered and installed in just one day, and can be fully re-mobilised and moved several times.

Minister for Environment and Water David Speirs said this project will enable SA Water to reduce its electricity costs while simultaneously benefitting the South Australian environment and natural surrounds.

“South Australia is a national leader when it comes to renewable energy and this innovative project further highlights the actions the Marshall Liberal Government is taking to build a strong green economy and reduce carbon emissions,” Minister Speirs said.

“This will be the world’s largest fully moveable solar array and when fully energised it will generate around 13 megawatts of green energy, which is enough to power 2,940 average South Australian homes while reducing net carbon emissions by 7,600 tonnes.

“The local community was involved in developing the solution for this site to reduce visual impacts, which informed the selection of this panel with a lower profile and ability to fit in a smaller area.

“The planting of grasses, shrubs and other native vegetation as borders and throughout the site will also create vegetations screens, windbreaks and wildlife habitat.

“In exciting news for southern suburb communities Happy Valley will be the next reservoir which we will be opening up for recreational access such as kayaking and fishing next year.”

Member for Davenport Steve Murray said the local community played a key role in the final design of the solar panel project.

“Happy Valley Reservoir is set to become a popular visitor destination in the coming years as we open it up for recreational access,” Mr Murray said.

“It’s important for both visitors and residents that the solar panel project is visually sympathetic to the natural environment and the local community has been consulted throughout the planning for this project.

“The solar array was reconfigured to fit in a smaller area and a 40-metre buffer of pine trees was retained between the panels and nearby Black Road, following ForestrySA’s recent harvesting of 13 hectares of its commercial Aleppo pine plantation within the reservoir reserve.”

The array at Happy Valley forms part of SA Water’s industry-leading renewable energy project aiming to achieve a zero cost energy future, headlined by the installation of more than 500,000 solar panels producing a total of 242 gigawatt hours of green energy each year.

“With our extensive water and wastewater operations making us one of the largest electricity consumers in South Australia, being able to generate solar electricity at sites like Happy Valley will make us more resilient to the volatility of the electricity market,” Mr Ryan said.

“The positive impact of our zero cost energy future will also be our environmental footprint, with the total estimated emissions reduction the equivalent of planting seven million trees.”

Water stored in the Happy Valley Reservoir is treated at the nearby Happy Valley Water Treatment Plant, which produces clean and safe drinking water to more than 40 per cent of SA Water customers across metropolitan Adelaide.