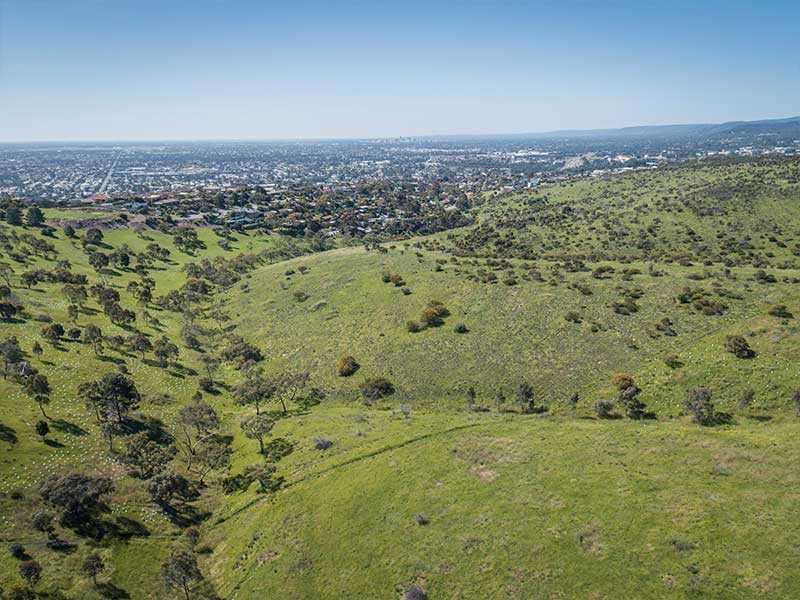 Last year, the Liberal Party of South Australia launched its vision outlining a desire to create Glenthorne National Park in the heart of Adelaide's southern suburbs. The proposed national park would forever protect the often under threat Glenthorne Farm and would also enhance surrounding existing areas of open space, including Happy Valley Reservoir and its surrounds (O'Halloran Hill Recreation Park, Marino Conservation Park and Hallett Cove Conservation Park), as well as protect and revitalise the Field River Valley, which is a mixture of public and private land that runs south of Glenthorne Farm behind Trott Park and Sheidow Park before reaching the sea at Hallett Cove beach.

While Glenthorne Farm remains the anchor site of the proposed national park and the focal point of a locally driven and long-term campaign to save that 208 hectares of farmland from urban sprawl, I do believe that it is important to ensure that all the areas of open space adjoining Glenthorne Farm can be encapsulated in this national park as we create an environmental precinct and a corridor. We know that these corridors are so important for the creation and enhancement of biodiversity between the hills and the sea—the hills behind Happy Valley Reservoir, moving through that reservoir site and into Glenthorne Farm, O'Halloran Hill Recreation Park to the north, the Field River Valley to the south and then, on the coast, Hallett Cove Conservation Park and Marino Conservation Park.

We know that science tells us that small envelopes of land, while valuable to protect by themselves, become so much more valuable to overall biodiversity when linked together in a connected environmental site, and that is the vision the Liberal Party of South Australia has for Glenthorne National Park. It is the connection of these areas of open space from the foothills at Happy Valley and even extending behind the Field River Valley behind that into Chandlers Hill and Aberfoyle Park and moving right through to the beach, to the estuarine environment and the dune environment at Hallett Cove beach.

Some of those existing areas of land are well cared for at the moment. There are active friends groups looking after the Lower Field River. That is a friends group which I actively got involved with as a founding member in 2006 and which really led me to become a member of the local council and then to this place in 2014. We have a very active friends group at Hallett Cove Conservation Park, another at Marino Conservation Park and another at O'Halloran Hill Recreation Park. We know that these are people who for many years have put their own resources, both in time and often financially, into caring for the local natural environment in the southern suburbs.

We know the value of looking after these existing open spaces, and the Liberal Party want to put more effort, more resources and more coherency of governance into looking after these sites. That is why we have said that not only will we look at protecting Glenthorne Farm and saving it from the ongoing threat of urban sprawl—and I will talk more about Glenthorne Farm shortly—but we also want to invest in these other very important elements of open space which are already protected. Some of them have been protected for many decades by South Australian legislation.

There is an opportunity to put a stake in the ground and say, 'When it comes to Adelaide's southern suburbs, we are going to look after this extensive tract of open space from the hills to the beach. We are going to protect it for future generations, and we are going to create a really vibrant, ecological environment which will be good for biodiversity but will also be good for the people who live around that area.' I am sure that people will come from further afield to enjoy it. In particular, those suburbs that immediately surround it are so important to connect with nature and ensure that they do not just become part of urban sprawl.

The people living there, young and old, can have areas of open public space in which to enjoy recreational activities and be able to connect with nature and their ecology within the urban environment. We know that cities are often characterised as places for people, but they should and can also be characterised as really great places for nature as well. I have a vision—a vision which the Liberal Party shares–that Glenthorne National Park can be not just a national leader, but perhaps a world leader in what a great national park can look like within the metropolitan environment.

It is not something that will happen overnight; in many ways, it is a blank canvas, particularly the Glenthorne Farm part of our proposal. It will take a generation or several generations to maximise the environmental benefit and impact of this site, but in the longer term, we can certainly get a fantastic environment connected with local communities. We can bring local communities into that site and get them to love that site. The best way to protect natural environments is to get people to love those natural environments. Get them to fall in love with it, and they will value it and they will invest in it. They will invest their time and resources, they will protect it and they will revitalise it.

That is our overarching vision for Glenthorne national park. It is worth dwelling for a moment on Glenthorne Farm itself. It is 208 hectares of open space (farmland) with quite a chequered history. Glenthorne Farm has a history going back to early European settlement in this state. It was the first home of Major O'Halloran, South Australia's first police commissioner, in the 1830s through to the 1840s, so it has a substantial historical significance to South Australia as well. There are also some significant heritage buildings on site, which could have significant adaptive value in the future. Sadly, they are falling to rack and ruin, or at least some of them are at the moment, but there is opportunity to look after those, to revitalise them and have that farm homestead, or what remains of it, as an anchor point within our plan for the national park.

I think it is a case of someone being given a gift that perhaps they did not really want and they did not have a series of plans that went alongside that gift, so they were left holding the baby and I do not think they really wanted to become parents. They have not embraced a really strong vision for the land. They have had it rented out ever since. As I said, they have let heritage buildings go to waste and have not at all done what is necessary to maximise the value of the Glenthorne Farm site.

That is something that I know the local community is disappointed about and that I think the wider environmentalist movement in South Australia is also disappointed about, that is, the University of Adelaide's inability to articulate and execute a vision which was in line with the deed for that site. We know that on a number of occasions the university has canvassed selling off portions of the land. I know that in the past the Labor government have opposed that and stopped it from happening, with a significant groundswell of angst and campaigning from the immediate community and also a community of stakeholders from further afield across the state.

While it is vested within the University of Adelaide with the current lack of plans for that site, there remains that threat. It is a blank canvas for the environment, but it could also be a blank canvas for development. It would be land that would be easy to develop, and I know that developers drive past that land and they look at it. No doubt they use Google Maps to measure it up and think, with an element of salivating mouths, that they could actually exploit the land for significant development opportunities.

The Liberal Party have said that we do not want that happening to that land. We do not want to see development on that land. It must be preserved. It is open space. Open space to that extent is rare to find in a metropolitan environment, and of course we know that once open space is lost to development open space is lost forever. So Glenthorne Farm should be protected, it should be protected under a national parks structure and it should be created for environmental restoration purposes and for the community to enjoy for recreational opportunities.

I want to pay tribute to the Friends of Glenthorne. I have mentioned other friends groups this morning, but I want to pay tribute in particular to the Friends of Glenthorne, who have had access to that property only once per month and who have done a significant amount to restore elements of that area's environment. But also, more than that, they have been the figureheads of driving forward the protection of that site and they have really fought time and time again to protect it.

The people I want to pay particular tribute to include Alan Burns, who has been heavily involved in that group; Dr Pam Smith; Pete Smitherman over the years; Martin Schumacher; and many other members of that group who have toiled away for quite some time. I want to pay tribute to my colleague the member for Mitchell. Much of that site falls in the area of South Australia he has stewardship of in this place. He has worked very closely with me as the local representative for that area as we have worked together to articulate that vision.

I also want to look very briefly at the third part of my motion, which calls on the government to fast-track the opening up of Happy Valley Reservoir for recreational opportunities. This has been something that the Liberal Party has been keen to see, not just at Happy Valley, but it has supported the opening up of a number of our reservoirs across the state. It happens interstate and it happens overseas. We know that the science tells us that passive recreation certainly does not impact on water security.

Of course, we know that much of our water in metropolitan Adelaide is sourced from the River Murray, not exactly the cleanest source of water but obviously, through modern purification techniques, it is lifted to drinking water quality and beyond, and there is absolutely no indication that recreation on reservoirs impacts water quality. In fact, having people involved in activity around reservoirs creates a system of passive surveillance, which in turn creates safer environments. To me, that is a very important part of the recreational opportunities that lie with Glenthorne National Park, the reservoir and also the recreational opportunities that lie along Majors Road, including a possible soccer precinct, a BMX precinct joining the existing model aircraft club, the archery club and the pistol shooting club.

The vision articulated by the Liberal Party of South Australia to preserve and revitalise Glenthorne Farm and the surrounding reserves as a national park is an exciting one. It is a flagship environmental project. I hope it is one that the Labor Party will embrace as well so that we can see that vision fulfilled and a fantastic environmental outcome delivered for South Australian’s.